Q. How would you define ‘Growth IQ’?
Growth IQ is a holistic approach to finding the path to growth for your organization, based on three inputs: the market context, the right combination of elements and the sequencing of your actions.  Your context includes current social and economic conditions, your existing product portfolio and the competitive landscape. The combination about selecting key actions and initiatives that—when done together—will positively influence outcomes; and sequencing is the act of establishing a priority, order and timing to those actions. A company might try to duplicate the visible elements of a rival’s growth strategy, but it is rarely able to figure out the combination and sequencing that led it to succeed.

Q. You have identified 10 paths to growth—three of which revolve around customers. Please describe them.
If you look at the most successful growth stories, one common theme is ‘innovative ways of dealing with and engaging with customers’. That’s why Customer Experience is the first path on my list—and it should serve as the foundation for all the other paths. If companies aren’t almost maniacally focused on what people value, they might acquire customers once and never sell to them again.

A second path is Customer-Base Penetration, which is all about mining the ‘gold’ that you already have. It costs six to seven times more to acquire a new customer than to retain an existing one—yet many companies get completely caught up in acquiring new customers. They forget about the customers they already have and how they can continue to deliver compelling value and a stellar experience to them.

Customer and Product Diversification is a third path to growth whereby you increase the number of things that you sell to customers. Say you used to sell doughnuts, and you decide to start selling doughnuts and coffee; or you used to sell running shoes and you decide to start selling shoes and running apparel. You’re basically expanding the footprint of the products you offer. The commonality of these three paths is that the customer lies at the centre of each and acts as the ‘True North’ for every decision a company makes.

Q. Optimize Sales is another path to growth. What are some of the keys to achieving this?
Companies often believe that to improve sales, they need to invest in a new CRM application or some new marketing technology. But I would advise people to step back from focusing on technology and ask questions like, Do we actually have a people and process problem and not a ‘systems’ problem? Are we using the right sales and market coverage model? Are we enabling our sales people to be as productive as they can be? Research shows that 50 to 60 per cent of a salesperson’s time is actually spent on non-sales activity—which I think everyone would agree is far from optimal.

Before you try to improve sales performance with some kind of external input—whether it be technology, additional sales hires or a change to your brand strategy—do an inventory of the things you are currently doing with the resources, systems and processes you have. In my experience, you may find that you can improve quota attainment by two to five per cent just by optimizing what you’re already doing, which in a large sales organization can deliver significant returns.

Q. Tell us a bit about the two paths that involve joining forces with other companies: Partnership and Coopetition.
Cisco would be an example of a pure Partnership strategy. You can’t go to Cisco.com and buy Cisco products; the company only sells to its customers via its vast partner ecosystem. They rely on 90 per cent of their overall revenue from various kinds of partnerships. Co-Opetition is a newer kind of partnership. Across industries, we are seeing companies joining forces with partners they would have viewed as competitors in the past, in order to serve common customers in a better way. Coopetition is about finding ways to work with competitors to accomplish things that neither of you could achieve alone. Recent examples of unlikely bedfellows include Best Buy and Amazon getting together to sell Fire TV; Nike selling its apparel on Amazon—which it swore would never happen; and Sears selling its home appliances on Amazon.

Q. What does an Unconventional Strategy look like?
When I started working on my book, I had originally intended for this path to be about how companies stimulate growth in unorthodox ways; but the past two years have exposed me to a different interpretation of what ‘unorthodox’ really means. ‘Doing well by doing good’ has become more important than ever, and in today’s environment, it is enabling growth. That’s because 79 per cent of consumers now prefer to purchase products from a company that operates with a social purpose.

When Mark Benioff started Salesforce 18 years ago, the model he came up with was very disruptive at the time: One per cent of its time, revenue, and software would be donated to not-for-profit companies to make the world a better place. In recent years, influential companies like Unilever and BlackRock have started to contribute to society through their business models. In fact, early in 2018, BlackRock leader Laurence D. Fink said that his firm will no longer invest in companies that ignore this imperative. The New York Times called this a ‘watershed moment’, so in my mind, it’s still very much an unconventional stance.

Q. Tell us about the fine line between Product Expansion and Market Acceleration?
Let’s use Starbucks as an example. Market Acceleration means, how do we put our foot on the gas of what we’re already doing with the existing products we have? It may just be that we’re doing it in new markets—like I’m just going to expand Starbucks from the U.S. and take it to London using the same layout, concept and products. That’s classic market acceleration. Product Expansion means selling more different types of products within your current environment. For example, Starbucks recently launched a new lineup of salads and sandwiches. That’s Starbucks saying, we want to offer more (similar) products in our same footprint (i.e. display case and category). 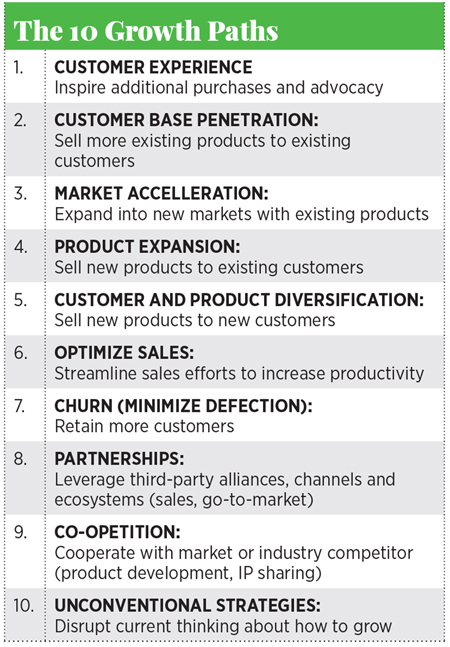 Q. Tell us a bit about the cautionary tale of Starbucks.
Between 1987 and 2007, Starbucks opened an average of two locations every single day—which is the very definition of Market Acceleration. Starbucks also pursued Product Expansion and Customer and Product Diversification by selling snacks, CDs, gifts and other retail items, stretching them beyond just coffee over the years.

But not all growth is good growth. By 2007, it had roughly 13,000 stores, but unfortunately, it had alienated many loyal customers with its product diversification choices. For example, in many stores, the smell of its breakfast sandwiches was completely overtaking the smell of freshly-brewed coffee. It had lost its focus on customer experience—and some might say, its soul. When Howard Schultz was brought back as CEO in 2008, he admitted: “The most serious challenge we face is of our own doing. We became less passionate about customer relationships and the coffee experience.”

The good news is that Starbucks was able to course-correct by returning to its roots, which had always been about delivering a memorable and value driven Customer Experience;  and along the way, it has figured out how to do Product Expansion right through  Partnerships with a wide variety of packaged-food providers that work seamlessly with its operational model.

Q. Should companies always use a combination of paths?
In most cases, a combination of paths will make each individual path more likely to succeed. For example, Customer Diversification, Product Expansion and Customer Experience often go hand in hand; and as I indicated earlier, Customer Experience must be the foundation for all 10 paths. The question is, which combination will work best for you? If you’re going to pursue Market Acceleration, for example, you might have to put a Partnership in place to help you sell in other countries where you may not have a footprint yet.

Q. Are any of the 10 paths being underutilized?
Overall, companies are spending a lot of time trying to get new customers in the door, and not nearly enough time focusing on the ones they’ve already acquired. This ties in with the Churn path, which basically means, growing by minimizing customer defections. The fact is, every business is going to lose a certain number of customers over time, and ‘the bucket is leaking out the bottom’: For every customer you lose, you basically have to add two to cover the one you lost, plus one to grow. The best way to beat the realities of Churn is to think more about the long-term value of each acquired customer—not just one-time sales.

Creating a sense of being in an exclusive club is one way to minimize churn. As big brands such as Adidas (with its Avenue A  subscription program) and Starbucks (with its Reserve Roastery) continue to expand the ‘membership economy’, there will be more focus on this particular path as a way to improve growth. Hopefully, one day soon, the rigor that goes into acquiring new customers will be equal to the rigor of managing your existing base.

Q. Any parting advice?
The best leaders know that growth needs to be counter-cyclical. That is, the best time to create the next big opportunity is when things are going well—not when you are struggling.  Too many companies have failed because they worked on yesterday’s context for tomorrow’s business. I hope to play a small role in encouraging less of that.

Tiffani Bova is the Growth and Innovation Evangelist at Salesforce and the author of the Wall Street Journal best-seller Growth IQ: Get Smarter About the Choices That Will Make or Break Your Business (Portfolio Penguin, 2018).


[This article has been reprinted, with permission, from Rotman Management, the magazine of the University of Toronto’s Rotman School of Management]

The Real Hero of the School? The Custodian