When I was an elementary classroom teacher, I always welcomed activities that could serve dual duty—combining the goals of two subjects at once, in a seamless whole. Such activities streamlined my work efforts (so important for busy teachers), and they used valuable classroom time to the fullest.

With the current strong emphasis on literacy and math, it makes great sense to combine these two subjects.

Three Ways to Use Literacy Activities to Teach Math Skills

1. Use stories to develop number line skills: One of the biggest contributors to math achievement, even into adulthood, is a strong grasp of the number line. While we might be tempted to think the number line is just about counting, it’s also about sequence and spatial relationship. Students who have a firm mental number line are far more able to manipulate numbers and have a better sense of when they’re moving in the right direction in solving math problems.

Sequence is built into our experience with books, partly because language itself is necessarily sequential. But, beyond the simple act of reading and having children read, teachers can purposely use stories with strong sequences to strengthen number line skills.

Let’s take, for instance, the largely wordless picture book Tuesday, by David Weisner, in which frogs take flight on lily pads from a deserted-looking bog, and then proceed to make a surreal trip through a residential neighborhood (even stopping to watch an old woman’s TV while she sleeps in front of it). 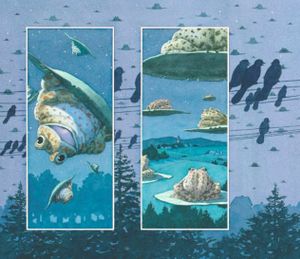 With just a little questioning, the teacher can turn the reading of Tuesday into a sequencing activity that uses the language of the number line (before, after, forward, backward, next, then).

Or the teacher can use a hands-on “story train” sequencing approach like the one I’ve included in my early reader Molly and Joe Want to Know (which includes story cards, the main events of the story in pictorial form—children re-enact the text by putting the cards in order, like linking rail cars in a train). Story trains can also use the language of the number line while providing the chance to manipulate spatial relationships along a single line.

Many picture books can easily be used to promote recognition of conservation of number. Anno’s Counting Book moves objects around as the elements of a town grow and shift. Or you can use titles like The Alphabet Room—which has the added benefit of teaching the alphabet—to track and count objects as they move around. Just say things like, “I see the apples moved. How many apples are there now? Are there still three? Where are they? Let’s count.”

For children who already recognize at a glance that there are still three apples, you can turn this into a fraction conversation. “Oh, look, one-third of the apples are on the left side. Where are the other two-thirds hiding?” Such a conversation won’t necessarily be simple—fractions are famously difficult even for adults—but this is a chance to speak the language and do the math together.

3. Using make-your-own books to solidify counting skills: It’s hard to believe that counting is a skill so predictive of math achievement even into adulthood, but it’s true: Those who count strong early on often have a lifelong math advantage.

A fun way to combine literacy and math is to make counting books that relate to your current texts. For instance, I’ve created a free downloadable color counting book that pairs with my title A Is for Azure: The Alphabet in Colors. (It also offers sequencing via inclusion of the days of the week.)

Such books—which children can color, write in, and eventually read aloud to friends and family—can also include important counting terms such as whole and altogether that relate naturally to the skill of addition.

If your classroom is a busy place, I encourage you to take advantage of crossover approaches that teach both literacy and math skills at once. You’ll reduce your workload, and your children can enjoy the richness of dual-duty activities.

Setting Students Up for College Success

Cranking Teaching Strategies Up to Awesome