The Toyota/Scion iQ was a pretty cool city car despite the fact that sales never took off during its short lifespan. The compact dimensions and the four-seater cabin make it ideal for city driving, although an iQ owner had a different usage scenario in mind: he turned his vehicle into an off-road animal using the underpinnings of a second-gen Suzuki Grand Vitara.

The guy behind this unconventional build is Eric Storz who was kind enough to share it with us. The project, called Sciuki iQ 4×4, started with a 2012 Scion iQ that received a pretty wild transplant. We are talking about the entire ladder-frame chassis and running gear from a 2000 Suzuki Grand Vitara – also known as the Chevrolet Tracker.

Predictably, in order to make it compatible with the tiny body of the iQ, Storz had to shorten the Suzuki frame, cutting 17.5 inches (445 mm) between the axles and an additional 16 inches (406 mm) off the rear overhang, while making eight new mounts. For good measure, the five-door variant of the second-gen Grand Vitara measures 162.8 inches (4,135 mm), while the Scion iQ measures 120.1 inches (3,051 mm). The stock interior was combined with a center console from the Suzuki and a pretty demanding task was to combine wire harnesses from both vehicles so the Suzuki drivetrain and the Scion creature comforts (air-condition, heater, lights, power windows, etc.) work properly.

Believe it or not, the stock naturally aspirated 2.5-liter V6 from the Suzuki made it under the bonnet, producing 155 hp (114 kW / 157 PS). Power is sent to all four wheels through a four-speed automatic gearbox with an extra short-gear manual shifter. For the drivetrain, Storz used parts from a 1998 Jeep Grand Cherokee at the front and made a bespoke rear using stock parts. Finally, the 15-gallon aluminum fuel tank had to be relocated under the driver’s side.

See Also: You Could Buy This VW Polo Off-Roader With Nissan Terrano II Underpinnings For Less Than $3k 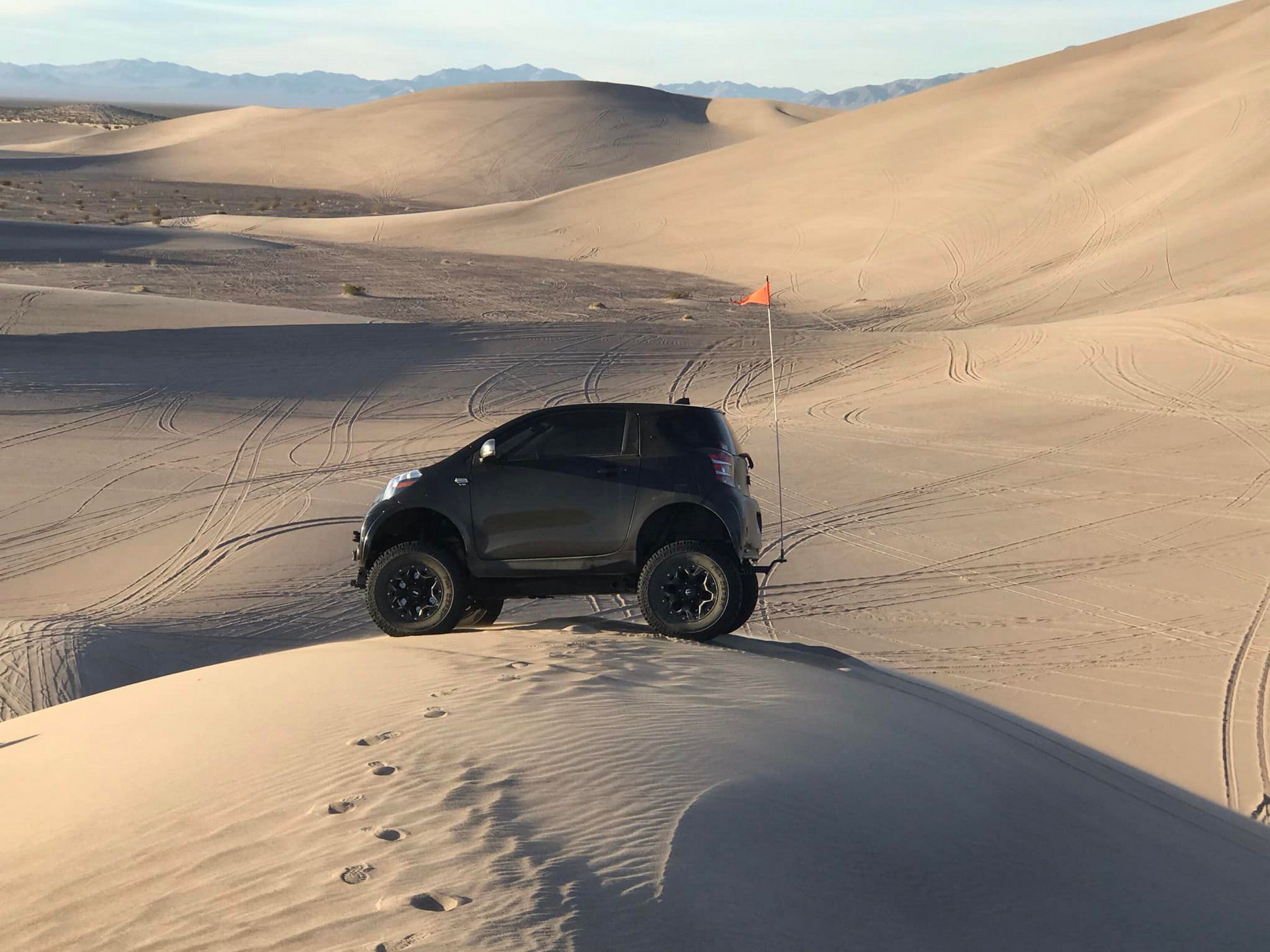 For even greater confidence off-road, the owner added a 3-inch lift kit by Altered Ego with SoftRide coil springs and SuperFlex rear links, combined with new axles featuring front and rear lockers. Most importantly, he opted for 17-inch wheels (instead of the stock 15 inches) shod in massive 31-inch Cooper tires making the iQ look like a Bigfoot truck. The final touches were the LED bars mounted on the front bumper and the whip flag at the back. While we suspect that the massive ground clearance and the short wheelbase won’t make a great combination for highway driving, this thing appears to be unstoppable off-road, climbing rocks and sand dunes with ease.

The conversion was complete in August 2020 and since then, the vehicle has been driven for over 5,000 miles (8,046 km) on and off the beaten track. According to the owner, the total cost was between $7,500 and $8,000 including all the cars and parts needed for the conversion. While this sounds quite affordable, we have to add the 90 hours of work needed to complete the build, and the skills required for such a decent job.

H/T to Eric Storz for sending us photos and information