On Friday, a diabetes expert described Medtronic’s Sugar.IQ diabetes assistant as a “key differentiator” among all the continuous glucose monitoring systems available in the market.

Roy Beck, an epidemiologist and executive director, Jaeb Center for Health Research in Tampa, Florida, was enumerating features and outcomes of competing CGMs available in the market when he called out attention to Medtronic’s Guardian 3 CGM system that has IBM Watson’s artificial intelligence-powered predictive analytics tool. This software can predict hypoglycemic events and offer decision support — something that no other CGM system can do today.

On Monday, Dublin-Ireland based Medtronic announced the results of a study that showed that patients using the Sugar.IQ diabetes assistant spent more time within a designated blood glucose range compared with those that didn’t.

Through this, the system continually analyzes how blood-glucose reacts to how much patients are eating, the amount of insulin dosage, their daily routines, and other factors. This data is then combined with artificial intelligence from IBM Watson, Medtronic’s partner, to  be able to see patterns in the data. Sugar.IQ can predict imminent highs and lows and alert patients to an oncoming event.

The results showed that patients using the Guardian Connect system with Sugar.IQ experienced an hour more daily within a designated glycemic range or 4 percent more than their counterparts using the Guardian Connect system alone. Further, those who used the optional Glycemic Assist feature to get input from the system on their specific food choices increased their time in range by another 4 percent compared to those who didn’t use that feature. Time in Range is the percentage of time diabetes patients spend in the optimal glycemic range of 70-180 mg/dL, and every 4 percent change in the so-called “time in range” translates to about a 0.3 percent reduction in A1c or blood glucose levels, per the Medtronic news release.

Here are some of the information  that the Sugar.IQ diabetes assistant can presents to users. 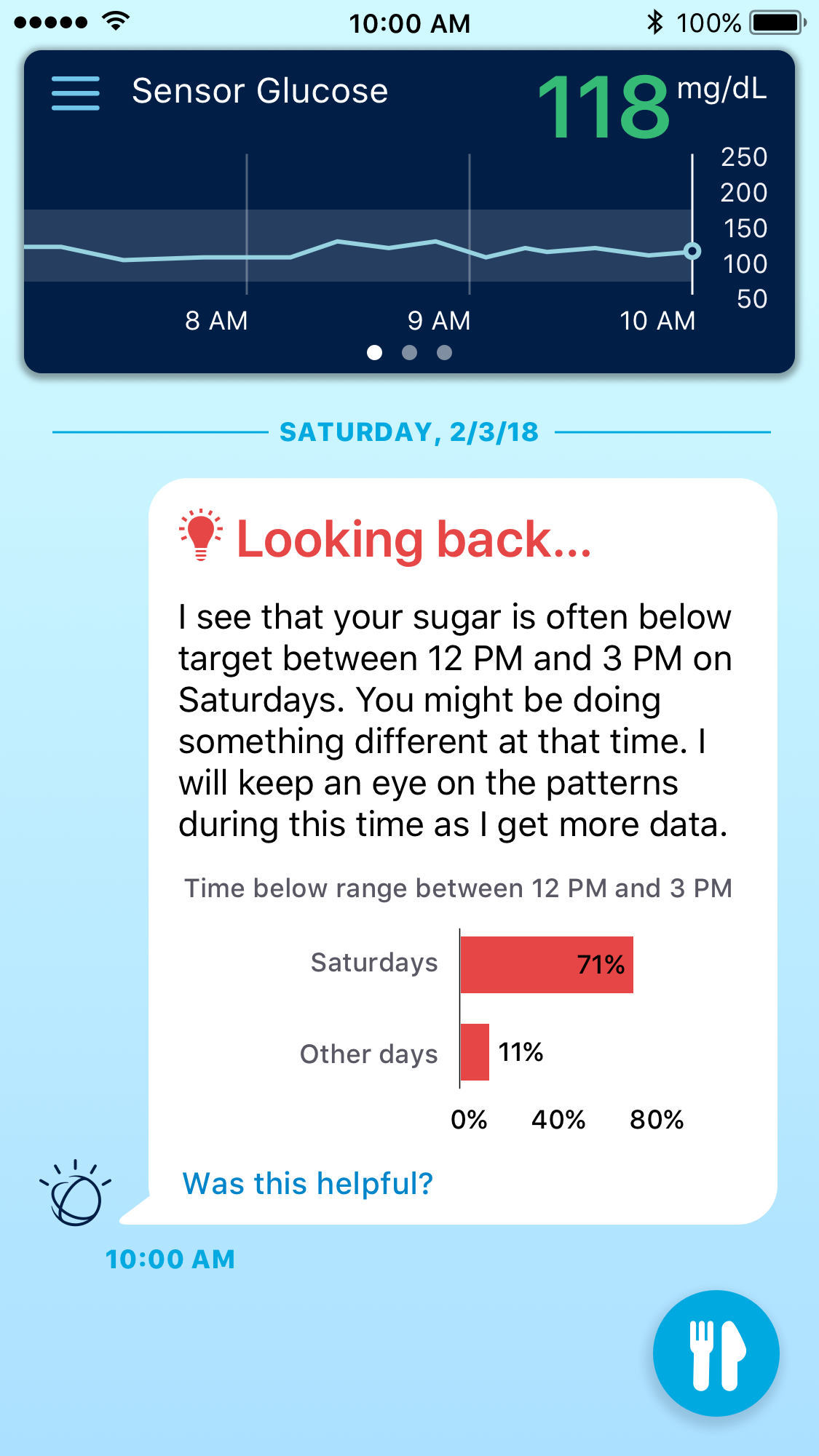 The study is based on 3,100 patients who used the Guardian Connect system for at least five days. The study also found that the Sugar.IQ decision support tool’s predictive alerts reduced low-glucose levels by two fold compared to those who didn’t use Sugar.IQ. Similarly, the AI-powered tool reduced high glucose events markedly as well.

“These results suggest the Sugar.IQ diabetes assistant, together with our Guardian Connect system, may help patients better understand glucose trends and increase their Time in Range, aiding in behavior change which may ultimately help improve clinical outcomes,” said Michael Hill, vice president and general manager of the Multiple Daily Injection Solutions business, which is part of the Diabetes Group at Medtronic, in a news release.

Along with Medtronic, IBM Watson also presented data on its machine-learning algorithm and its ability to predict low-glucose events within a one-to-four-hour window

The model was trained on anonymized CGM data from more than 10,000 MiniMed 530G and Guardian Connect users that represent more than 10 million patient hours. In this retrospective data analysis, the machine learning models achieved 90 percent accuracy in predicting hypoglycemic events within a two-hour window and 85 percent accuracy in predicting events within a four-hour window.