Tyson Fury will exploit gaps left by a ‘reckless’ Deontay Wilder and can knock out the WBC champion, claims trainer Ben Davison.

The lineal heavyweight king has fought only twice since his masterful display against Wladimir Klitschko in Dusseldorf in 2015, but Davison is confident Fury will rise to the occasion and exploit Wilder’s porous defence.

“Wilder can be reckless and the more emotionally involved he is and the more he looks for a vicious knockout, like he was talking about at the press conference, the more gaps he’s going to leave for Tyson to exploit”, he told BTSport.com.

“He has not boxed anyone with [Fury’s] IQ. Luis Ortiz was a good fighter, but he doesn’t have the capabilities that Tyson has. 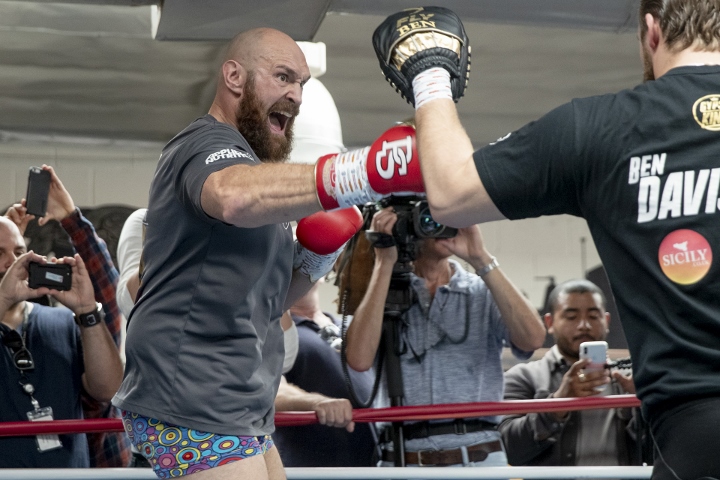 Davison, who previously trained former middleweight world champion Billy Joe Saunders, linked up with the Gypsy King after his split with his Tyson’s uncle and widely respected trainer Peter Fury.

Despite his relative inexperience as an elite-level trainer, Davison has struck up a cohesive partnership with Fury and has been credited for overseeing his dramatic weight loss.

He would have preferred Fury to take a few more tune-up fights before challenging for world honours so their fledgling relationship has more time to blossom, but he is unwavering in his belief that Fury has the skills to return to the summit of the heavyweight division.

Fury’s famous victory over Klitschko was attributed in part to his mind games in the lead up to the fight and Davison is confident his man already has the mental edge over the fearsome puncher from Alabama.

“He’s already [in his head]. You watch the press conferences and it was hyped. Why? Because Tyson was hyped.

“Tyson was the one talking about power. So we’ve got him exactly where we want him and everything we set out to do is going perfectly to plan.”