The power of positive thinking spread to Facebook users in August, as affirmations was one of Facebook IQ’s Topics to Watch for the month.

Facebook IQ wrote, “A simple positive statement may have more power than you think. Affirmations are intended to help people develop higher self-esteem and boost their moods over time. Some people even believe that repeating positive statements will manifest positive outcomes in life. And new applications are helping people make positivity a habit, as they listen to pre-recorded affirmations at set times during the day. In recent years, people have embraced mobile apps and fitness trackers that support their physical health, but the next movement in health tech may be mental and mindfulness-based. 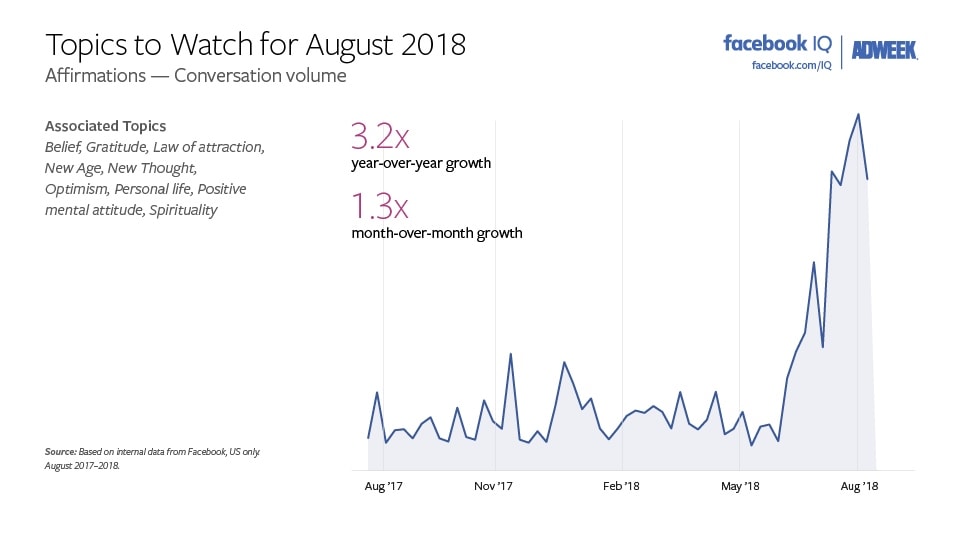 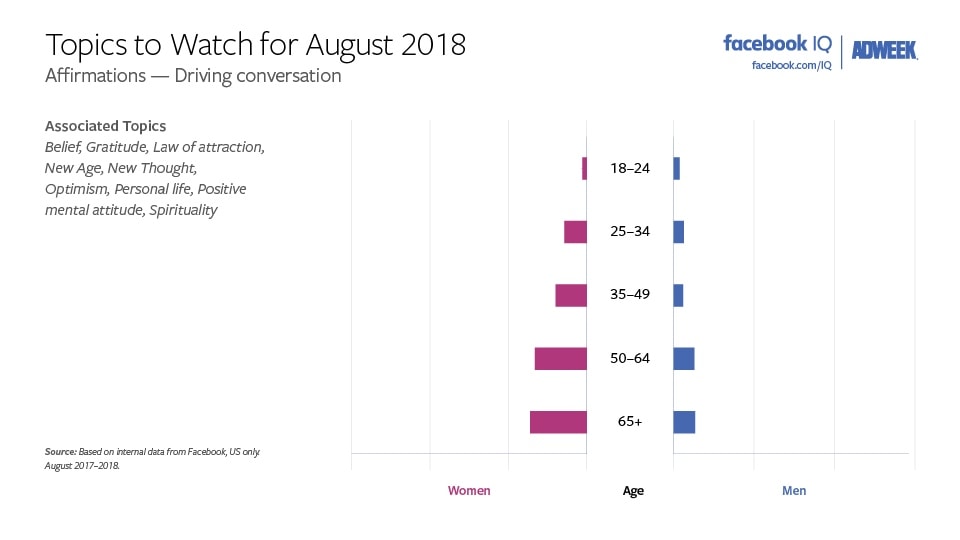 The social network’s research arm wrote, “Caldo de pollo translates to ‘chicken broth,’ and it’s akin to chicken soup as a cure-all and comfort food within Latin American communities. Unlike other chicken soups, caldo de pollo gets its rich flavor from whole pieces of chicken, cilantro, lime and, occasionally, jalapeño. This soup is gaining a growing following online, as people create and share cooking tutorials for their favorite family recipes. Mexican and Tex-Mex dishes are increasingly popular across cultures, and caldo de pollo is one of many classics offering comfort—with a twist. 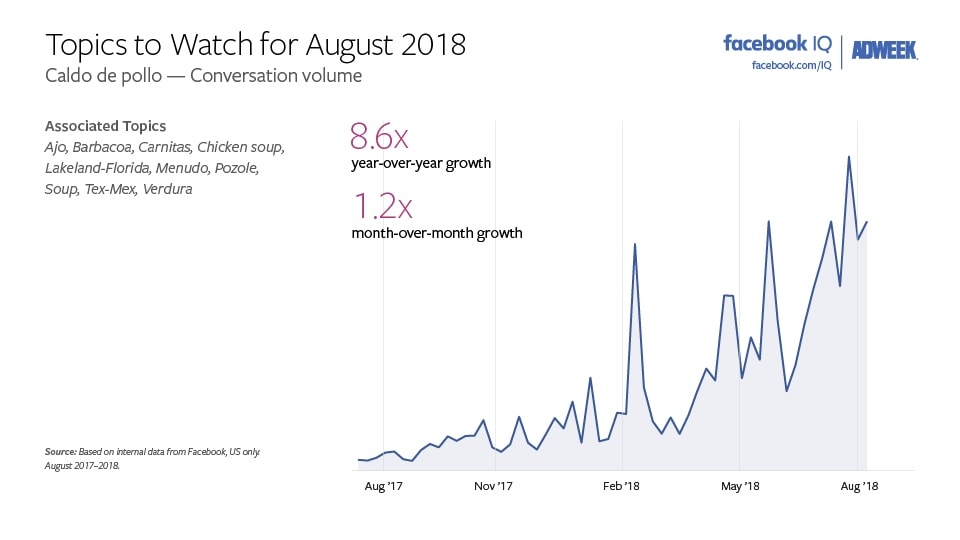 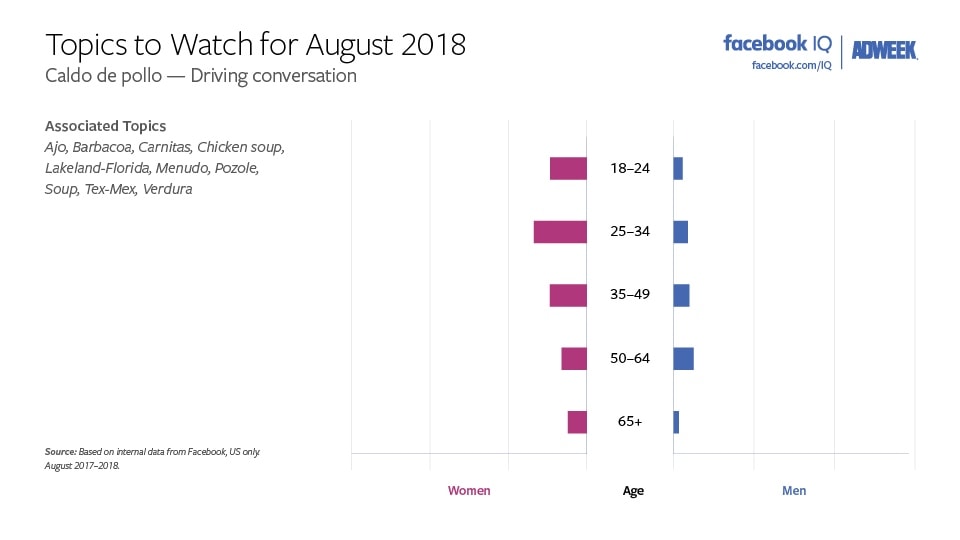 Compositing and associated topics visual effects, Nuke, rotoscoping, motion graphics, Adobe After Effects, chroma key, 3D modeling, animation, Adobe Photoshop and software were on the monitors of men 34 and under in August, with conversation up two times year-over-year and 0.7 times month-over-month.

Facebook IQ wrote, “In the world of digital effects, compositing is a crucial step. It’s the process by which video editors are able to mix real and synthesized visual elements to create alternative realities on-screen. With new software on the market, filmmakers of all levels are now able to create even more complex and high-quality scenes that blur the line between reality and fantasy. And as virtual reality and mixed reality take hold, compositing will become even more essential for developers and filmmakers looking to create believable virtual worlds. 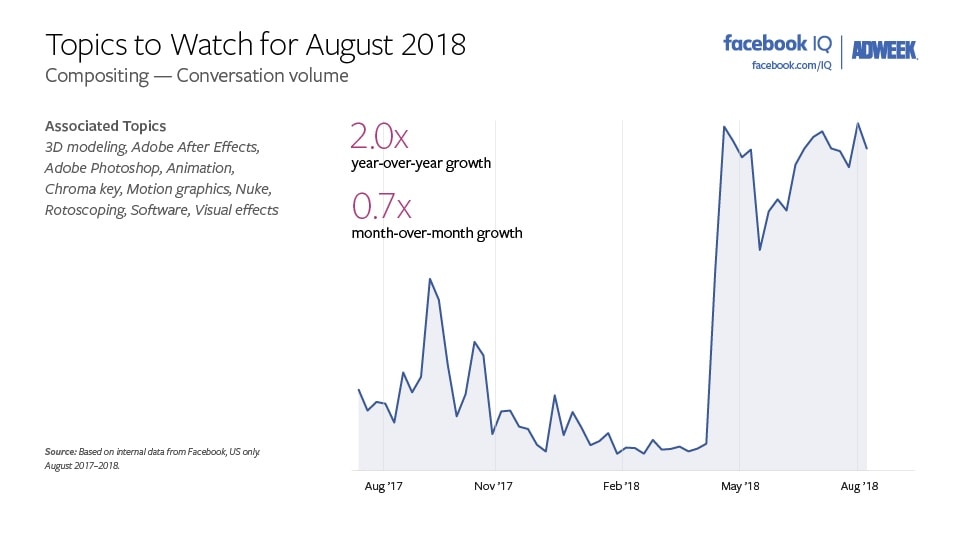 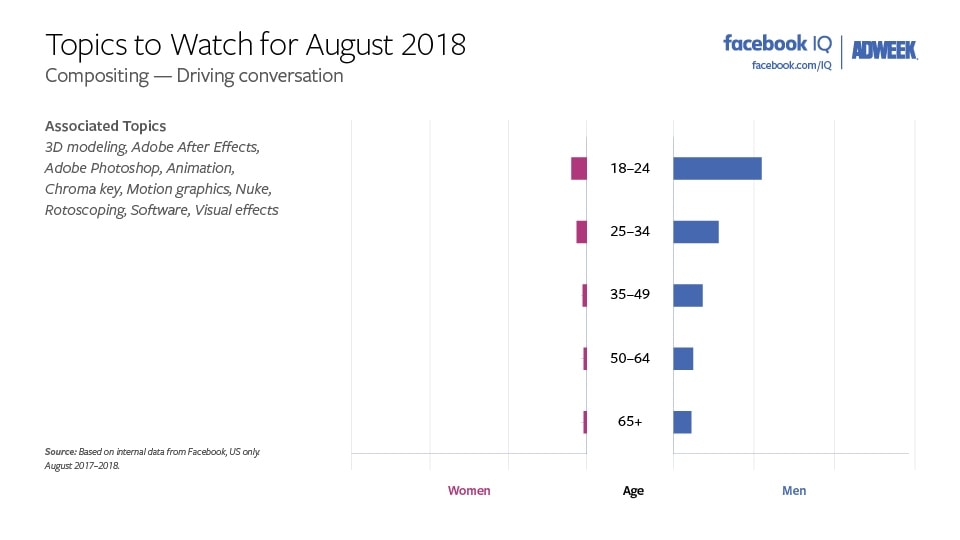 All of that video editing brought back the hunger for people on Facebook, as soul food—along with recipes, food, cornbread, fried chicken, fashion, turkey, cooking, U.S., cheese and eating—saw upticks in discussion of 2.9 times versus August 2017 and 0.8 times compared with July, and no particular gender or age group stood out.

Facebook IQ wrote, “While soul food has a longstanding history in the American South, it’s now experiencing a nationwide revitalization. Rising chefs are putting new spins on traditional recipes, crafting vegan alternatives—like jackfruit nachos and fried cauliflower—that maintain similar flavors and textures of beloved dishes. Some are even substituting healthier meats, like turkey, for heavier standards, like pork. As soul food adapts and spreads across regions, some things hold true: People still strongly associate it with tradition, family and community. 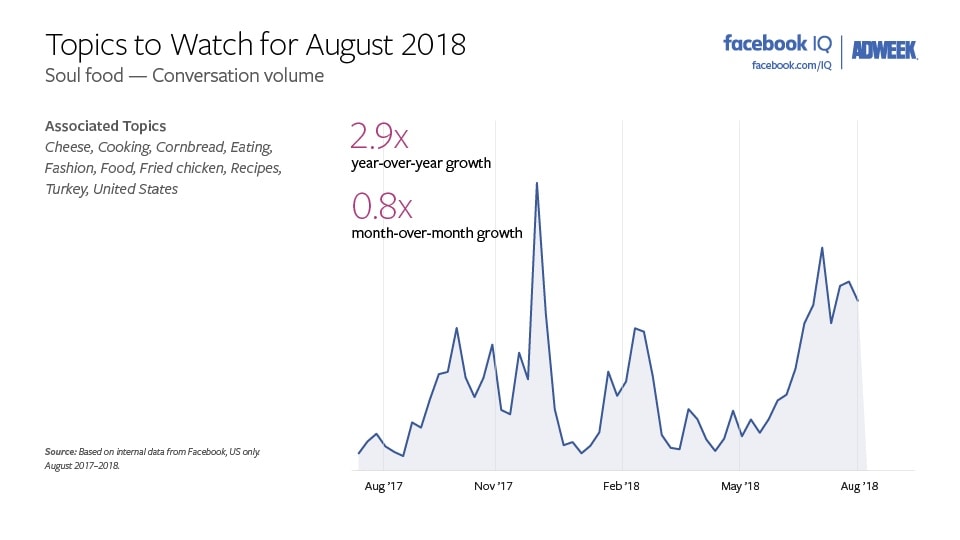 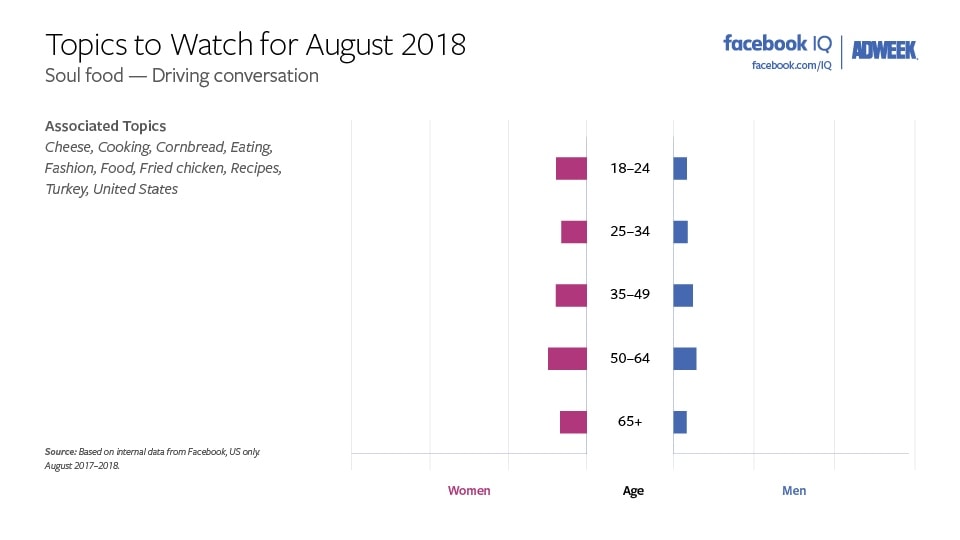 The backlash against straws made its mark on Facebook last month, as straw and related terms reed (plant), alpaca fiber, caludovica palmata, Panama hat, plastic, paper, hay, Greg Gutfeld, wheat, Ecuador and California saw conversation soar 21 times year-over-year and 2.7 times compared with July, with a slight edge to women 18 through 24 and 50 and older.