Facebook users looked to add some green to their living spaces in July, as aglaonema was one of Facebook IQ’s Topics to Watch for the month.

Discussion about aglaonema and associated topics spathiphyllum, philodendron, dieffenbachia, araceae, alocasia, evergreen, monstera deliciosa, pothos, monstera and terracotta was up 3.9 times compared with July 2018 and 0.7 times versus June, driven largely by women 25 through 49.

Facebook IQ wrote, “The houseplant craze continues as millennials seek to add to their indoor gardens. Aglaonema is a popular option, characterized by its aesthetically pleasing leaves marked with streaks of pink. For city dwellers, aglaonemas are an appealing option, as they require limited light and minimal care. And these plants are now available from online retailers, making it easier than ever for people to jazz up their homes with natural life. For many, the appeal is both aesthetic and health-related—in addition to adding a touch of green to urban spaces, plants are said to purify indoor air. Plants continue to grow in popularity, as people discover monsteras, pothos and aglaonema varieties online and share photos of their green spaces on social media.” 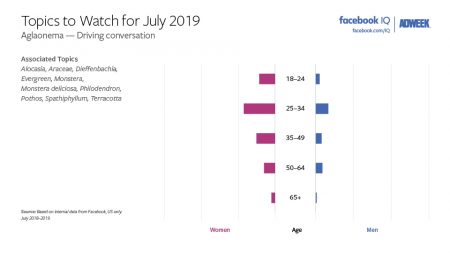 Women 50 and older dominated the discussion.

The social network’s research arm wrote, “From chicken and dumplings to soul food, Southern dishes have continually trended on Facebook. Now, the broader cuisine is sparking conversations. People are exploring what makes Southern cooking so unique, from its multifaceted roots to the variety of dishes. For some, Southern food is characterized by the use of meat, while others see the flavor profile as distinctive. Chefs have been adapting and spreading this cuisine nationwide, creating vegan interpretations of classic meat-based dishes and adding modern twists to traditional foods. While the cuisine has existed for generations, it’s seeing a surge in popularity as new audiences discover what makes these foods so special.” 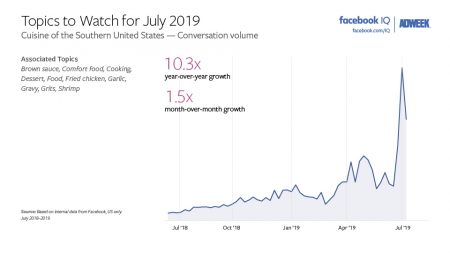 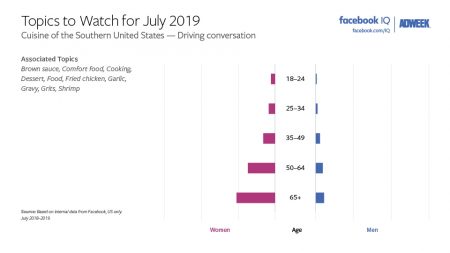 Getting that hair out of there was also a heavy topic of discussion among women 25 and older in July,

Facebook IQ wrote, “A relatively new technology in the beauty world, intense pulsed light is used to remove hair and improve skin. IPL works by delivering a broad spectrum burst of light that can be programmed to target specific skin issues or hair growth. It’s similar to laser treatments, which use light and heat to affect parts of the skin. But unlike laser treatments, intense pulsed light tools can be calibrated to target a range of conditions, depending on an individual’s needs. Skin-care experts are praising photo facials, a skin treatment that utilizes IPL to reduce the appearance of fine lines, wrinkles and skin discoloration. As new technology enters the beauty industry, people are interested in testing out innovative methods for maintaining—and improving—their skin.” 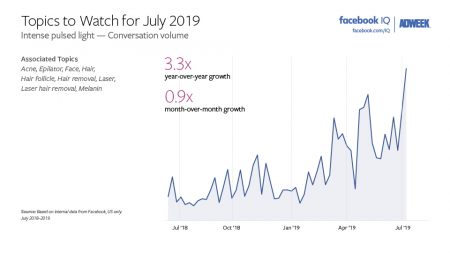 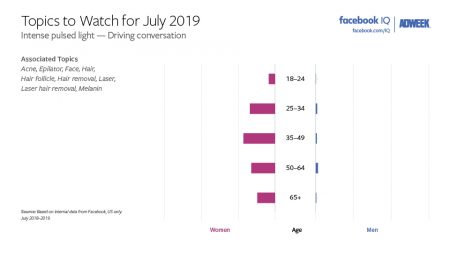 Women 35 and older accounted for a slightly larger portion of the discussion.

The social network’s research arm wrote, “New Mexican chiles are a staple in the state and are incorporated into a range of dishes—from burritos to lasagna. These chiles are known for their subtle, spicy flavor, and they can be eaten either green or red, depending on the desired intensity. Many of these chiles are known as “Hatch chiles,” hailing from Hatch Valley in the state. Now, they’re gaining nationwide popularity: A heated online feud even emerged recently between Colorado and New Mexico residents over which state had the best chiles. And New Mexican chilies are even taking off beyond Earth: A variety was chosen for an expedition to space, as scientists seek to better understand how different foods can be grown outside of our planet. People across the nation are spicing things up with New Mexico chiles, and the buzz seems set to grow.”

Bilingualism Myth Busters: This Printable Poster Will Get Your Students Excited About Language Learning

9 Quick and Easy Ways to Do Lunch Count